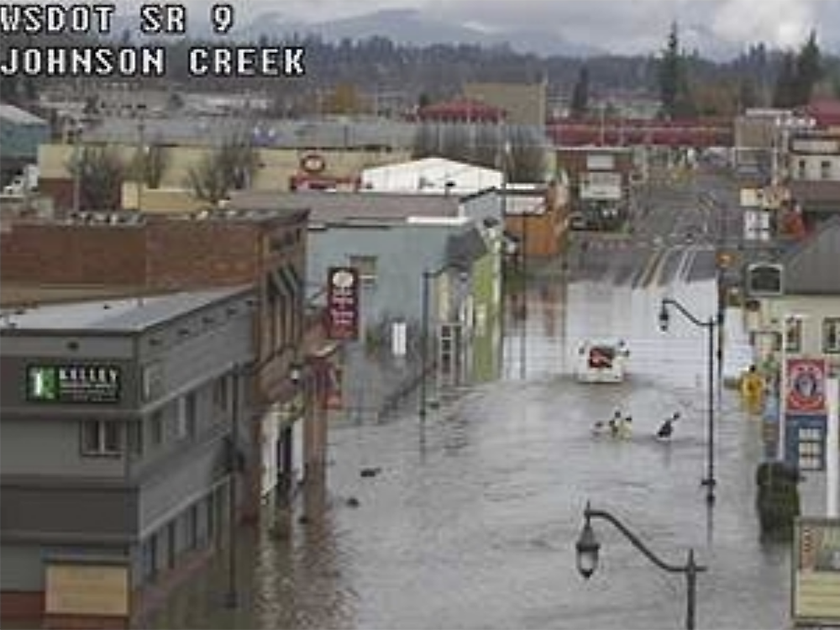 The heavy rainfall has made for one of the wettest Januarys on record, and caused some skiers to extend their trips after a mudslide trapped them at a Fraser Valley ski resort.

About 250 were evacuated by helicopter from Sasquatch Mountain Resort on Sunday, after a mudslide took out a section of the only route in and out of the Hemlock Valley ski hill.

Resort spokeswoman Shelby Lim said there were three helicopters shuttling people off the hill all day, with 80 people booked to leave the resort on Monday. The helicopter fare was $150, landing at Chilliwack airport.

“Everyone is in good spirits and the community has really pulled together,” Lim said.

The drama began on Friday evening when heavy rainfall washed out a section of Hemlock Valley Road and cut power to the resort, 90 minutes northeast of Abbotsford.

Lim said there were plans for a large racing event starting Saturday, so the lodge was well stocked with food and drinks. However, without road access the ski lifts could not operate over safety concerns in case someone had to be taken by ambulance off the hill.

She said the helicopter shuttle service began on Saturday, with about 300 skiers choosing to stay on the mountain because they had homes there or were on a long-term ski trip.

Sasquatch Mountain, formerly Hemlock Valley Resort, has been operating since 1969 and this year opened a four-chair lift.

Lim said power was restored to the resort on Sunday afternoon, just in time for the Super Bowl. She said the lodge was operating on generators before that.

Meanwhile, the Cowichan Valley Regional District declared a state of local emergency over the weekend, due to heavy localized flooding.

Major transportation corridors were closed by high levels of water Saturday, particularly in the area of Crofton in North Cowichan.

As a result, 23 people were evacuated, with 18 of those people shuttled to Duncan to stay with family and friends. Another 28 people from North Cowichan and the Halat First Nation were housed Saturday overnight at the Cowichan Community Centre.

On Saturday, the district said the Trans-Canada Highway had been closed a kilometre south of the Chemainus River, as water on the road made it difficult to drive. The highway was later reopened in both directions, though local roads remained closed.

On Sunday, the district maintained its state of local emergency but said the threat of further flooding had subsided.

The Sumas border crossing in the Lower Mainland was also closed in both directions on Sunday morning due to flooding.

There were a number of other roads around the region closed due to flooding or washouts.

Near Squamish, the Squamish Valley Road was partly closed in both directions due to a washout about five kilometres from Highway 99.

Up near Harrison Hot Springs, Rockwell Drive was closed in both directions due to a washout and debris between Dogwood and Rockwell lanes.

The heavy rainfall also washed out some connections for major phone service-providers, including Telus, Rogers and Bell.

According to Bell’s support Twitter account, it was damage to a “third-party’s fibre line near North Bend on Saturday afternoon” that caused disruptions for Bell- and Virgin-mobile-users in B.C. Mobile data, text messaging and calls to 911 weren’t affected.

Transit Police also experienced issues with their phone system, though their text service was still operating as normal.