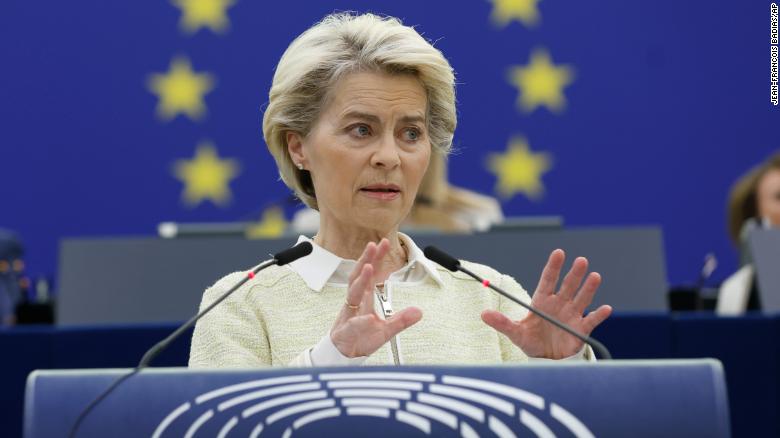 London (CNN Business)The European Union is proposing to ban oil imports from Russia and remove the country’s biggest bank from the SWIFT international payments network as part of a sixth round of sanctions over the war in Ukraine.

European Commission President Ursula von der Leyen unveiled the new package of measures during a speech to the European Parliament on Wednesday.
“We now propose a ban on Russian oil,” she said. “Let’s be clear: it will not be easy. But we simply have to work on it. We will make sure that we phase out Russian oil in an orderly fashion, to maximize pressure on Russia, while minimizing the impact on our own economies.”
News of the proposal, which still needs the approval of all EU member states, boosted crude oil prices. Brent futures, the global benchmark, rose 2.4% to $107 a barrel, while US oil futures were up 2.7% at $105 a barrel at 3.30 am ET.
Oil prices have already risen by about 40% since the start of the year on fears that Russia’s invasion of Ukraine will deliver a supply shock, fueling inflation and piling pressure on European economies.
EU countries have already agreed to phase out Russian coal imports but the bloc has found it much harder to reach consensus on oil sanctions despite weeks of talks. Hungary recently reiterated its opposition to an oil embargo, and Slovakia is reportedly seeking an exemption.
Russia is the world’s second-biggest crude oil exporter, and last year accounted for about 27% of EU oil imports. The United States, Canada, United Kingdom and Australia have already banned imports of Russian oil.
Source: CNN
Share!
Tweet

The war against ISIS was all a waste!

(CNN)Earlier this year I spent almost two months in northeast Syria covering what we thought wa ...