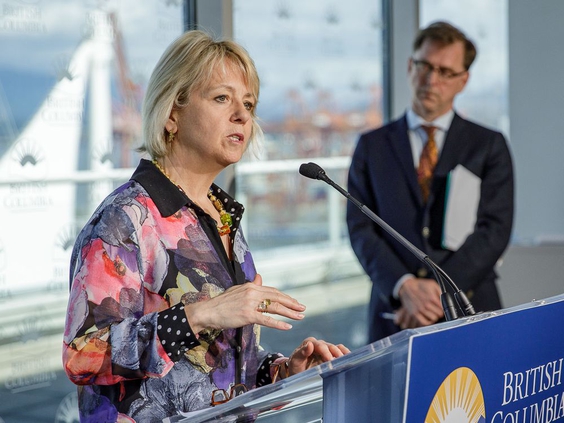 British Columbians have increased their contacts to about 65 per cent of normal without causing a surge in coronavirus cases or hospitalizations, according to a B.C. government analysis released Tuesday.

That’s up from an estimated 30 per cent of normal contacts when full restrictive measures were in place that included closing schools and universities, limiting restaurants to take-out and shutting personal service businesses such as hair salons and barbers.

However, the province’s analysis of cases and computer modelling shows that B.C. is at the threshold of a rebound where one case could generate one or more additional cases.

An important factor in why there has not been a resurgence is that the increased contacts appear to be safe ones that honour physical-distancing recommendations, said B.C.’s provincial health officer, Dr. Bonnie Henry.

The balancing act that B.C. is now in — where it has managed to reopen society and the economy without a huge rebound in cases — must be maintained by British Columbians continuing to do use all the measures that have helped the province control the virus, likely into next year, said Henry.

Those measures have included keeping two metres apart from those that are not in your household or social bubble, people staying home when they are sick or not feeling well, hygiene measures such as washing hands and increased cleaning in public places, as well as the use of barriers such as Plexiglas where people interact with clerks in stores.

It also includes the use of non-medical masks when people find themselves unable to maintain two-metre barriers.

If people continue to use those measures, even as B.C. continues to open up, including restarting the film industry and allowing resorts to open, for example, there should not be a resurgence in cases, said Henry.

If interactions between people were to increase to 70 per cent to 80 per cent of normal, modelling shows that would be a problem.

“Right now, we are in a strange place because until we have the ability to protect the population from this virus either through an effective treatment or a vaccine, we have to find a balance that’s going to keep people from getting sick in large numbers,” said Henry.

But right now, she said, B.C. has found that balance.

Henry said a concern is there are other jurisdictions in the world that have relaxed restriction quickly and have experienced resurgences in the virus, including in the United States and Brazil.

More than half of U.S. states have recently reported a rise in cases while the death total in the U.S. has reached more than 121,000, according to information compiled by Johns Hopkins University. More than 51,000 people have died in Brazil, while Canada has had more than 8,500 deaths, largely in Ontario and Quebec.

The province reported 13 new cases on Tuesday in the previous 24 hours, bringing its total to 2,835. There are 16 people hospitalized, with seven in critical care.

The computer modelling also underscored the critical role that contact tracing plays in providing a buffer against renewed growth of cases. It showed that contact tracing must be complete and prompt, uncovering at least 75 per cent of contacts and doing so in under three days.

Henry said that has been the case so far, with public health officials tracking down 97 to 99 per cent of contacts in all cases within 48 hours.

B.C. Health Minister Adrian Dix says the province will continue to support contact tracing with the resources it needs.

Dix also pointed to measures such as quarantining temporary foreign workers for 14 days before they are allowed to go to work in B.C. as a measure that has protected the province against the spread of the virus.

Henry reported that during that quarantine phase, 27 temporary workers, mostly from Mexico, were found to have the virus. Workers were not allowed to go to work until they had recovered from COVID-19.